When my wife Grace and I moved to Guilford, Connecticut, 18 years ago, we were grateful that it was a town where you could walk for a reason. To go to the library. To get a pizza. To get your hair cut. To some people, those may seem like petty things. But for us, they meant a great deal.

Last March, our lives were disrupted in many ways. We stopped traveling by plane and train. Our time with extended families was mostly restricted to phone calls and Zoom sessions. But the nearby disruptions were just as bad. Trips into stores were quick, no-nonsense errands. The rest of our lives within walking distance began to lose out in our risk-benefit calculations. After a while, the isolation began to feel normal. Now that I’ve gained immunity, it takes effort to rediscover the town all around me.

Today’s small victory was a haircut at the Village Barber Shop. I still wore a mask inside, but I no longer felt keenly aware of the invisible aerosols swirling around me. All the old rituals felt new. The smock, covered in images of combs, hairdryers, and mirrors, going around my neck. The chat about this year’s high school graduation plans. The buzzing clippers and the straight-edged razor removing a year’s worth of hairy chaos. 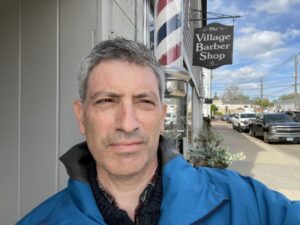 These experiences feel like unearthing buried treasures. I relish them, even as I think about how bad the pandemic remains. Worldwide, the average number of daily new cases remains far above the summer peak, driven largely by the catastrophic surge in India. A country like India should be far along in vaccinating its citizens–after all, India has become a vaccine-producing powerhouse in recent years. But their campaign has slowed to a crawl, leaving millions at risk of infection.

Vaccines were the focus of much of my work this past month for the New York Times. My colleagues and I broke the story when the U.S. government recommended a pause for the Johnson & Johnson vaccine. We went on to write about the review of reports of rare blood clots. I wrote about some of the preliminary research on why vaccines such as J&J and AstraZeneca might lead to such side effects in a very few number of cases. I talked about the disruption on the Daily. Soon the pause was lifted. But the effect was profound. Before the pause, the use of Johnson & Johnson’s vaccine was swiftly rising. Since the pause lifted, its uptake remains low.

Meanwhile, scientists have been debating about how best to use the limited number of vaccines the world has. I wrote about how some countries are choosing to delay second doses to get first doses to more people.

Behind the currently authorized vaccines, a second wave of vaccines is coming. Clinical trials may reveal that some of them are superior to existing ones, in terms of effectiveness, cost, or ease of use. I wrote about a structural biologist who has discovered what could be a potent new kind of vaccine, which could be grown cheaply in chicken eggs. I also wrote about an RNA vaccine that might join the ranks of Moderna and Pfizer-BioNTech. And as my colleagues have done reporting on their own on other developments in the world of vaccines, I’ve been organizing the news on the New York Times vaccine tracker, where we are now following  90 vaccines through clinical trials.

This month I also had a number of delightful conversations about Life’s Edge, on Science Friday, Quirks and Quarks, RadioWest, and Good Chemistry. And thanks to AudioFile Magazine for an Earphones Award for the audiobook of Life’s Edge. All credit goes to Joe Ochman for his agile spoken-word skills. Here’s the Audible version. Other audiobook outlets can be found here.

You can find information and ordering links for my fourteen books here. You can also follow me on Twitter, Facebook, Goodreads, and LinkedIn. If someone forwarded this email to you, you can subscribe to it here.