Evolution: The Triumph of an Idea 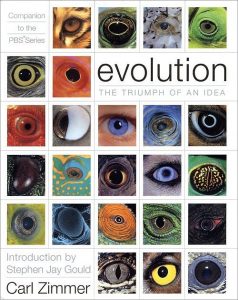 “Zimmer writes in a gloriously clear and lively style…. His coverage is as thorough as it is graceful. This is as fine a book as one will find on the subject.” —Scientific American

Darwin wrote The Origins of Species in 1859, long before paleontologists and geologists worked out the chronology of life on Earth, long before biologists uncovered the molecules that underlie heredity and natural selection. The great irony of Darwin’s work is that not until the twentieth century would scientists be able to recognize its true power. Evolution: The Triumph of an Idea takes readers to the cutting edge of evolutionary biology—from the origins of life to mass extinctions to the latest theories on diseases, sex, and psychology—and explores the far-reaching implications of Darwin’s theory on our place in the world.

Originally published in 2001, it is now available in a reissued edition with a new forward by Carl Zimmer, exploring the new scientific breakthroughs and political controversies that have emerged since the book first came out.

New Scientist
Do we need more books about Darwin? Yes, we do, but only if they are as good as Carl Zimmer’s Evolution, which brings the great man’s ideas bang up to date.

The Guardian
From the voyage of the Beagle to the latest DNA research on Galapagos finches, Zimmer takes us on a comprehensive tour of the history and implications of evolution…[An] admirable book

Bioscience
Evolution: The Triumph of an Idea is one of the best and most thorough books about evolution available. Overall, it is very well written, entertaining, lively, and convincing, and it effectively mixes science with human interest to produce a fascinating saga of one of the greatest ideas in history.

Donald C. Johanson, director of the Institute of Human Origins and
co-author of Lucy: The Beginnings of Humankind
Zimmer’s vivid and accessible celebration of Darwin’s powerful idea is essential reading for all who wish to know how life arose and diversified. Readers will delight in this engaging book which will leave them with an enriched and profound understanding of the interconnectedness of all life–past, present and future.

From Chapter One: Darwin and the Beagle

In late October 1831 a 90-foot coaster named HMS Beagle lay docked at Plymouth, England. Its crew scrambled about it like termites in a nest. They were packing the ship as tightly as they could for a voyage around the world, one that would last five years. They rolled barrels of flour and rum into the hold and crammed the deck with wooden boxes that contained experimental clocks resting on beds of sawdust. The Beagle’s voyage was a scientific one: its crew would be testing the clocks for the British navy, which depended on precise timekeeping to navigate. Exquisitely detailed maps would be drawn on the voyage as well, so mahogany lockers were installed in the poop cabin and packed with navigational charts. The crew replaced the ship’s 10 steel cannons with brass ones so that not even the slightest interference could confuse the Beagle’s compasses.

Amid the flurry of preparations, a 22-year-old man picked his way. He moved awkwardly around the ship, not only because his 6-foot frame was oversized for the cramped quarters, but also because he felt profoundly out of place. He had no official position on the ship, having been invited to keep the captain company during the voyage and act as an unofficial naturalist. It was usually up to a ship’s surgeon to act as the naturalist for a voyage, but this awkward young man had no such practical skill. He was a medical school dropout who, for want of any other respectable line of work, was considering a career as a country parson when the voyage was over. Once he had stowed away his preserving jars, his microscope, and the rest of his equipment in the poop cabin, he had nothing more to do. He tried helping the assistant surveyor calibrate some of the timepieces, but he didn’t even know enough math to do the most basic calculations.

The name of this awkward young man was Charles Darwin. By the time the Beagle returned to England five years later, he would be transformed into one of Britain’s most promising young scientists. And out of his experiences on the journey, he would discover the single most important idea in the history of biology, one that would permanently alter humanity’s perception of its place in the natural order. From clues that he collected aboard the Beagle, Darwin would show that nature had not been created in exactly the form it takes today. Life evolves: it changes gradually but perpetually over vast gulfs of time, driven through those changes thanks to the laws of heredity, without any need of direct divine intervention. And humans, far from being the pinnacle and destiny of God’s creation, were but a single species among many, another product of evolution.

Darwin would send Victorian England into a crisis with his theory, but he would offer an alternative view of life that has turned out to have a grandeur of its own. It is clear today that evolution connects us to the dawn of Earth, to showers of comets and death-winds of stars. It produced the crops we eat and now helps insects destroy them. It illuminates the mysteries of medicine, such as how mindless bacteria can outwit the best minds in science. It holds a warning for those who would take from Earth without limits; it reveals how our minds were assembled among lonely bands of apes. We may still struggle with what evolution says about our place in the universe, but that universe is all the more remarkable.

The Beagle is remembered today only because of Darwin’s experience on board the ship. But if you tried to tell that to the sailors rolling barrels aboard they might have laughed without even a glance at the young man who was pretending to know what he was doing.

“My chief employment,” Darwin wrote to his family from Plymouth, “is to go on board the Beagle and try to look as much like a sailor as ever I can. I have no evidence of having taken in man, woman or child.”