The Tangled Bank:
An Introduction to Evolution 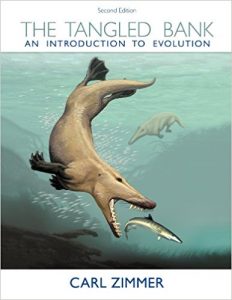 When it was first published in 2009, The Tangled Bank was the first textbook every written specifically for non-majors college students and became widely adopted in colleges across the United States and other countries. For the second edition, Zimmer has thoroughly updated the book, incorporating cutting-edge research from across biology and developing more effective ways to explain the key concepts of evolution. With vivid portrait of scientists and their research, he demonstrates how vital evolution is to all branches of modern biology—from the fight against deadly antibiotic-resistant bacteria to the analysis of the human genome. Richly illustrated with over 300 illustrations and photographs, The Tangled Bank is essential reading for anyone who wants to understand the history of life on Earth.

The Quarterly Review of Biology
This is the first textbook I have seen by a professional science writer. If this is a sort of experiment in textbook publishing, it is a spectacularly successful one…The result is an introduction to the field that is not only accurate and up to date, but—of course—well written. How important is the prose in a textbook? For students, lively versus leaden, or clear versus cryptic, can be the difference between understanding and not, between being turned on to a field and being turned off. For what it is worth, I solicited help for this review from a biologically inclined high school student, who read a few chapters and reported it to be both clear and engaging….In summary, this is an excellent textbook, one that ought to be—and will be, I predict—widely adopted.

Evolutionary Applications
“The Tangled Bank is an attractive and captivating book, masterfully told…All readers will be able to immerse themselves in the captivating field of evolutionary biology as written by a master storyteller.” Read the full review.

Choice
“Those familiar with the books, newspaper and journal columns, and commentaries by Zimmer will be delighted that he has turned his considerable writing skills to creating an accessible and superbly illustrated introduction to biological evolution. The best books on evolution are those that synthesize the processes of evolution (natural selection, mutation, the origin of variation, the role of development) with the patterns of evolution (the fossil record, phylogenetic trees, changes within and between species) and introduce readers to the major players and how they study evolution. Zimmer describes all these processes and patterns of evolution admirably, using his flair with language and substantial knowledge of biology–the latter aided by four scientific advisers, who have advised him well. Zimmer has a gift for finding just the right example to fascinate the reader, encouraging him or her to want to read on and learn more. The book is astoundingly well illustrated; it could serve as a coffee-table book as well as an up-to-date introduction to the changing ways in which evolution has been and is being studied. The inclusion of selected readings allows entry into the primary literature. A book to both browse and read in depth. Summing Up: Highly recommended. All libraries.” Read the full review.
— B. K. Hall, emeritus, Dalhousie University

Evolution
“The back cover of The Tangled Bank is plastered with enthusiastic encomiums by several dominant figures in evolutionary biology and science education today. Among other features, they point out the quality and compelling nature of its writing and illustrations, and its ability to capture the ferment of this rapidly moving scientific field for a nonmajors audience. As instructors with many years of experience teaching evolution topics to undergraduates, we agree. Carl Zimmer’s approach is a rather radical departure from most textbooks. But we fully expect it to rivet reluctant students’ attention, and that is exciting indeed.” Read the full review.

The American Biology Teacher
“For students of evolution or scholars who want to know the specifics about particular evolutionary processes, this is an excellent read. The fact that it is understandable to beginners and fascinating to scientists makes this book truly unique and valuable.” Read the full review.

Nature
“The book is billed as the first textbook on evolution for the general reader, and in that framework, it excels.” Read the full review.

Scicurious
“This book is, hands down, the best textbook I’ve ever read.” Read the full review.

Bioscience
“In the best of all worlds, every educated American could and should read this book, and as a result, would have a much richer understanding of evolution as a force directly affecting our lives.” Read the full review.

“The Tangled Bank is the best written and best illustrated introduction to evolution of the Darwin centennial decade, and also the most conversant with ongoing research. It is excellent for students, the general public, and even other biologists.”
— Edward O. Wilson, Harvard University, author of Consilience

“Carl Zimmer’s excursion through the evolutionary epic is without equal. His gift for the scientific narrative is on full display through The Tangled Bank, and he leads his readers onward with an energy and delight that never disappoints. This marvelous text is an extraordinary introduction to the depth and richness of evolutionary science.”
— Kenneth Miller, Brown University, author of Only a Theory: Evolution and the Battle for America’s Soul and co-author of Miller & Levine’s Biology

“Zimmer has produced a wonderfully thorough introduction to evolutionary biology. With his prose and color diagrams by leading artists produced specially for this volume, The Tangled Bank will be a powerful tool to introduce students to the explanatory power of evolution and the way that it integrates different fields of knowledge. I have no doubt that this important volume will find its way into diverse courses in the curriculum.”
— Neil Shubin, University of Chicago, author of Your Inner Fish

“One rarely says of a textbook, ‘I couldn’t put it down,’ but that was how I felt reading Carl Zimmer’s Tangled Bank. Zimmer has applied his award-winning communication skills to producing a readable yet up-to-date and thorough treatment of evolutionary biology. Were I teaching evolution, this is the book I would use.”
— Eugenie Scott, Executive Director of the National Center For Science Education and winner of the 2009 Stephen Jay Gould Prize

“Carl Zimmer’s The Tangled Bank is a joy to read. He draws readers into the excitement of the rapidly expanding science of evolutionary biology, as he explains why life on earth is so diverse and how the web of life evolved to be so entangled. He explains, through elegant prose and beautiful illustrations, the remarkable progress that has been made in recent years in understanding the evolutionary process.”
— John Thompson, University of California, Santa Cruz, author of The Geographic Mosaic of Coevolution

“In clear, accessible prose, Carl Zimmer explains how 21st century science confirms the 19th century’s most radical idea. If you want to understand life’s remarkable past and uncertain future, read The Tangled Bank.”
— Andrew Knoll, Harvard University, author of Life on a Young Planet: The First Three Billion Years of Evolution on Earth

“This engagingly written and well-organized book is a wonderful introduction to evolutionary biology. It beautifully synthesizes the conceptual basis of evolutionary theory with the empirical evidence that evolution has occurred. The book is remarkably up-to-date, seamlessly moving from discussion of fossils to genomes, and nicely illustrates that evolutionary biology is a vigorous field that increasingly takes an experimental approach.”
— Jonathan Losos, Harvard University

“Zimmer weaves cutting-edge findings and essential concepts around the personalities and adventures of the biologists themselves. The result is superb: an up-to-date, articulate, and gorgeously illustrated introduction to modern evolutionary biology. We sorely needed a text aimed at the nonmajor undergraduate, and Zimmer was exactly the right person to write it.”
— Douglas J. Emlen, Professor of Biology, University of Montana