A Planet of Viruses 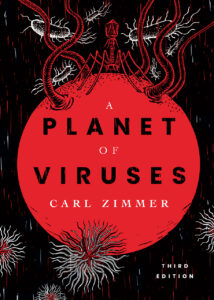 Read an excerpt from A Planet of Viruses at io9

Now in its third edition with new illustrations

“In A Planet of Viruses, science writer Carl Zimmer accomplishes in a mere 100 pages what other authors struggle to do in 500: He reshapes our understanding of the hidden realities at the core of everyday existence.” —The Washington Post

Viruses are the smallest living things known to science, and yet they hold the entire planet in their sway. We’re most familiar with the viruses that give us colds or Covid-19. But viruses also cause a vast range of other diseases, including one disorder that makes people sprout branch-like growths as if they were trees. Viruses have been a part of our lives for so long that we are actually part virus: the human genome contains more DNA from viruses than our own genes. Meanwhile, scientists are discovering viruses everywhere they look: in the soil, in the ocean, even in deep caves miles underground.

A Planet of Viruses pulls back the veil on this hidden world. It presents the latest research on how viruses hold sway over our lives and our biosphere, how viruses helped give rise to the first life-forms, how viruses are producing new diseases, how we can harness viruses for our own ends, and how viruses will continue to control our fate for years to come.

In spring 2021, the University of Chicago Press released the third edition of A Planet of Viruses. It contains new illustrations from the artist Ian Schoenherr, as well as scientific updates throughout–including a new chapter on Covid-19.

The Guardian
Viruses are everywhere: scientists have found them under Antarctic ice; they lurk inside your lungs which until recently were believed to be sterile; and seawater, which was once thought to contain very few, has now been found to be teeming with viruses. In fact, they outnumber all other residents of the ocean by 15 to 1. Even the human genome contains genes that came from viruses which infected our ancestors some 30m years ago, an idea that Zimmer describes as “almost philosophical in its weirdness.” In this succinct yet elegantly written survey, he explores the vital role viruses play in the evolution of life on Earth and how scientists have begun to reveal their often deadly secrets. Smallpox – the only human virus to have been eradicated – killed an astonishing 500m people every century in Europe between 1400 and 1800. From the common cold, first described 3,500 years ago by the Egyptians, to a new type of giant virus discovered in a Bradford water-cooler that mimics bacteria, this book is a fascinating and enlightening introduction.

Washington Post
In A Planet of Viruses, science writer Carl Zimmer accomplishes in a mere 100 pages what other authors struggle to do in 500: He reshapes our understanding of the hidden realities at the core of everyday existence. The question “Who am I?” is as old as Moses, but Zimmer suggests that on a fundamental DNA level, each of us is actually more virus than “I.” He digs into the head-spinning adaptability and variety of viruses, while revealing lots of interesting information, such as the potential healing power of bacteriophages (viruses that infect bacteria). That last topic is particularly newsworthy as we stride into an era when the over-use of antibiotics may have helped bacteria develop increasingly tough skins and bad attitudes. “It’s clear now,” Zimmer writes, “that phage therapy can treat a wide range of infections. . . . Scientists at the Eliava Institute [in the country of Georgia] have developed a dressing for wounds that is impregnated with half a dozen different phages, capable of killing the six most common kinds of bacteria that infect skin wounds.” Whether he’s exploring how viruses come to America or picking apart the surprisingly complicated common cold, Zimmer’s train of thought is concise and illuminating.

“I’m a serious fan of Carl Zimmer, and A Planet of Viruses provided a new treat. It’s thoughtful, precise, and engrossing, page by page. Zimmer has an uncanny ability to tell cool tales about nature that leave you with new thoughts and understanding, always keeping precisely to the science.”
—Richard Preston, author of The Hot Zone

“Carl Zimmer is one of the best science writers we have today. A Planet of Viruses is an important primer on the viruses living within and around all of us—sometimes funny, other times shocking, and always accessible. Whether discussing the common cold and flu, little-known viruses that attack bacteria or protect oceans, or the world’s viral future as seen through our encounters with HIV or SARS, Zimmer’s writing is lively, knowledgeable, and graced with poetic touches.”
—Rebecca Skloot, author of The Immortal Life of Henrietta Lacks

Microbe Magazine
This book is pure reading pleasure. It is amazing how seamlessly Carl Zimmer tells the stories of viruses in short chapters, describing the history, microbiology, and impacts of viruses in interesting, informative, readable chapters.

Booklist (Starred review)
“The effects of viruses have been known since time immemorial, thanks to the common cold, the flu, and smallpox. But when viruses were physically discovered in the late nineteenth century, it was by elimination; that is, something was discovered that caused disease but wasn’t animal, plant, fungus, or bacterium. The electron microscope finally made that something visible, and its basic mechanisms were ascertained by 1950. What has been discovered about viruses since, however, dwarfs all that previous virological knowledge. For viruses are everywhere, and a recurring motif of Zimmer’s information- packed, superbly readable, brief essays is the assay of a substance—seawater, human sputum, subterranean warm water segregated for hundreds of thousands of years from the biology of the rest of the world—thought to be relatively or positively pure finds it crawling with viruses. Obviously, not all viruses kill or even sicken. In fact, it’s not so much a matter of perforce having to live with viruses as not being able to live without them, and not just because they’re so tiny, ubiquitous, and numerous but also because they help produce the oxygen we breathe and because some of them disable bacteria toxic to us—among other vital things. Absolutely top-drawer popular science writing.”

Onion A. V. Club
“Viruses get a bad rap. Most people just know them as the cause of suffering around the world, from the AIDS epidemic to the common cold. But while many scientists consider viruses too simple to actually be classified as life, the research presented in A Planet Of Viruses shows the incredibly complex nature of their relationship with life on Earth.”

Boing Boing
“It’s almost like a picture book for grown-ups—a smart, beautiful, and somewhat demented picture book that’s likely to give you a case of the willies. In the best way possible.”

“This little book will interest anyone on this planet who has ever played host to a virus. It is beautifully clear, eminently sensible, and fascinating from beginning to end—like everything Carl Zimmer writes. I don’t know how Zimmer does it! Neither does anyone else who follows and enjoys his work.”
—Jonathan Weiner, author of Long for This World

“An accessible and gripping narrative on a serious topic that manages to explain, in plain English, how viruses are changing the world. Carl Zimmer has found great stories and woven them into an honest, optimistic book. It is a wonderfully vivid and compelling read.”
—Nathan Wolfe, founder and CEO of Global Viral Forecasting