She Has Her Mother’s Laugh:
The Powers, Perversions, and Potential of Heredity 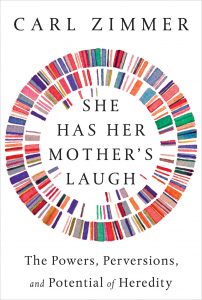 The New York Times Book Review  calls She Has Her Mother’s Laugh “extraordinary…This book is Zimmer at his best: obliterating misconceptions about science with gentle prose. He brings the reader on his journey of discovery as he visits laboratory after laboratory, peering at mutant mosquitoes and talking to scientists about traces of Neanderthal ancestry within his own genome. Any fan of his previous books or his journalism will appreciate this work. But so, too, will parents wishing to understand the magnitude of the legacy they’re bequeathing to their children, people who want to grasp their history through genetic ancestry testing and those seeking a fuller context for the discussions about race and genetics so prevalent today.”

Several portions of the book have been excerpted. You can read the prologue here. Additional excerpts have been published in the New York Times,The Atlantic, andThe Globe & Mail.  I wrote “Seven Big Misconceptions about Heredity” as the cover story of the May/June 2019 issue of Skeptical Inquirer.

And here’s an episode of the Science Vs podcast about one chapter of the book.

If you’re in a book club, here’s a guide you can use for your discussion (pdf).

Here’s an interview on Fresh Air. Bill Nye talked with Carl and his daughter Charlotte about the book on his podcast Science Rules. Zimmer  also spoke to WNYC’s Midday about heredity: listen here. Cosmologist Sean Carroll talked to Zimmer for his Mindscape podcast. You can also watch Zimmer in conversation about She Has Her Mother’s Laugh on BookTV.

“A gripping human story…Please read this book now.”
—Jennifer Doudna, winner of the 2020 Nobel Prize in Chemistry and co-author of A Crack in Creation

“She Has Her Mother’s Laugh is a masterpiece–a career-best work from one of the world’s premier science writers, on a topic that literally touches every person on the planet.” —Ed Yong, staff writer at the Atlantic and author of I Contain Multitudes

“A sweeping, magisterial book that illuminates the very nature of who we are.”
—David Grann, author of Killers of the Flower Moon

“Nature’s laws are violated all the time, and the cardinal violator is nature itself. This is the paradox that Carl Zimmer explores in She Has Her Mother’s Laugh: The Powers, Perversions, and Potential of Heredity. Mr. Zimmer, a New York Times science columnist and author, is careful and well-informed. So when he says that research is overturning things you were taught in biology classes, he’s worth heeding. Acquired traits can be inherited. Biological time can turn backward. And monsters are real.”—Wall Street Journal

“A story filled with palace intrigue and breathtaking innovation.”—O, The Oprah Magazine

“This is the story of how science discovered the role our genes play in heredity, of how we become who we are, and how we learnt to understand the process. It takes in humble plant breeders and sinister eugenicists, ‘chimeras,’ who are the child of more than two people, and the role of Neanderthal genes within our own bodies. All this swirls around Zimmer’s fascinating exploration of his own genome. The book handles science and cultural history with equal verve and nuance; a rare combination.”—The Sunday Times

“She Has Her Mother’s Laugh is an unlikely page-turner spanning the primordial origins of life, Nazi eugenics, and the promise and perils of gene editing.”–London Review of Books

“She Has Her Mother’s Laugh brims with rich stories and colorful actors—some sinister, some brilliant, some both—and delves into scientific research, history, and ideas made intimate through the author’s personal experiences.”–The Atlantic

“Expansive, engrossing, and often enlightening… Zimmer takes readers on a tale through time and technology, from the inbred Holy Roman Empire to the birthplace of American eugenics to the Japanese lab where scientists are reprogramming skin cells into eggs and sperm.”—Wired

“Zimmer is one of the best science journalists of our times, with a long history of setting the bar for beautiful, clear, and scholarly writing. He is true to form in this book…She Has Her Mother’s Laugh is more than a historical account of the field of genetics. It’s a treasure trove of curious facts, contextual tidbits, and up-to-date reports on the trials and tribulations of heredity told in a most entertaining way.”–Science

” It is a work that makes you want to connect to the universe.”—The Quarterly Review of Biology

“A beguiling narrative…In She Has Her Mother’s Laugh, Zimmer has built a subtle, multifaceted and deep understanding of heredity, grounded in revelatory insights from genome sequencing. And he shows that we will need it to face our uncertain future.”—Nature

“A dazzling romp through laboratories, history and ancestry that gets at the big genetic questions that shape our species.”  —The Globe and Mail

“The strength of [She Has Her Mother’s Laugh]…is its combination of accuracy, journalistic clarity and scientific authority…If the science doesn’t matter to you now, it will soon.” —The Washington Post

“What do we pass on from generation to generation? This deeply researched book explores the murky past of genetic research as well as its fast-moving present.” —The Guardian

“This extraordinarily knowledgeable, informative, readable and entertaining book demonstrates that its author is one of the finest science writers in the English-speaking world.” –Frankfurter Allgemeine Zeitung

“Balances eloquent story-telling with well-researched science.. Anyone interested in their path through history, and what they may hand on, will find much to excite them”—New Scientist

“A grand and sprawling book that investigates all aspects of inheritance, from ancient Roman law to childhood learning, and on to the bacteria that inhabit our belly buttons (which are surprisingly varied among individuals). Along the way, the book provides many amusing historical anecdotes and important scientific insights…Some of the most fascinating material Zimmer covers concerns the phenomena of mosaicism and chimerism, in which individuals are made up of cells with differing genetic inheritances.” —Tim Flannery, New York Review of Books

“Genetics was once a deeply unfashionable – even suspect area of scientific research. But the subject produced some fine works in 2018, the best of which is the remarkable She Has Her Mother’s Laugh.” —Prospect

“Makes the complex science of heredity read like a novel.”
—Elizabeth Kolbert, Pulitzer-prize winning author of The Sixth Extinction

“I loved this book.”
—Robert Sapolsky, Stanford University, and author of Behave

“A magnificent work…as engrossing as it is enlightening.”
—Publisher’s Weekly (starred review)

“A totally impressive job all around.”—Charles C. Mann, author of 1491: New Revelations of the Americas Before Columbus

“She Has Her Mother’s Laugh explains how our emerging understanding of genetics is touching almost every part of society, and will increasingly touch our lives.”
—Charles Duhigg, author of Smarter Faster Better and The Power of Habit.

“She Has Her Mother’s Laugh is a chronicle of timeless values, and the permanent importance of bonds of kinship and the passing of generations in human culture. It is also a stark caution against human hubris, as the early decades of hereditary science show just how much damage science can cause when it’s poorly done and unethically applied. Finally, it is a wondrous exposé of the rapid-fire results and advances being made in 21st-century genetics, and the social and cultural consequences that they might unleash.” —National Review.